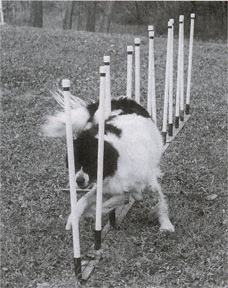 They said it couldn't be done. A Newfoundland earn an Excellent Agility title? And an eight and a half year old Newf at that!

No one had the guts to say it to us, but I'm sure that was said many times in private conversation. Many of the doubters have certainly changed their opinions.

Dyna and Joan started their agility careers when Dyna was going on five. Agility was new to all of us, and seemed like a fun activity to try which might be a good outlet for Dyna's boundless energy. Little did we know what was in store for us.

Dyna earned her Novice Agility title easily. After all, all she had to do on a typical course was jump seven, 24inch high jumps, climb and descend a five foot tall A-frame, scramble across a one foot wide, 36-foot long dog walk four feet off the ground. Climb and tip a teeter-totter, down or sit on a table, and negotiate a few tunnels. And she had around 60 seconds to do it.

On to Open. This meant that Dyna had to learn to negotiate weave poles. These are vertical poles spaced about 20 inches apart through which the dog slaloms. Open is otherwise a lot like Novice. But faster. With more jumps and fewer permitted errors.

Four months later, Dyna earned her Open Agility title, the second Newfoundland to do so. So far, so good. 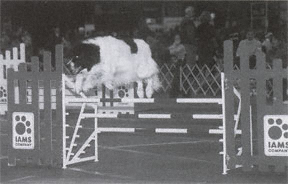 On to Excellent. Around 20 obstacles. Even less time. Even fewer errors permitted. As we were to learn, Joan and Dyna were really quite unprepared. When the runs were fast enough, the jumps came down. When the runs were clean, the time was hopeless. The courses were, after all, not designed for giant breeds. And Dyna was getting older.

This was the story for almost two years. Lots of miles. Lots of training. No AX legs. Dyna took a six-month break to deliver and raise her puppy, Flyer. You'll understand the name when you meet him!

We worked on stamina, speed, and steering.

And then we met our secret weapon, Jill Lang. Jill is a massage therapist who had previously worked on Dyna's mother after an injury. Could massage help Dyna's agility career? We scheduled Dyna's first massage for the day before her next trial. Dyna earned her first AX leg at that trial, with a first place. Jill became a regular visitor to our house, massaging Dyna every two weeks. Ten trials later, Dyna was the first Newfoundland to have earned the AX title. Observers see a "younger" Dyna. Jumps stay up. Course times are achieved.

In February 1998, the AKC introduced the Jumpers with Weaves titles. These classes are similar to the standard agility classes with the predominant changes being the lack of climbing obstacles and a significant reduction in the allowable course time. Dyna earned her Novice Jumpers title in her first three attempts, and became the second Newfoundland to earn that title. A few more trials and she was the first Newf to earn the Open Jumpers title. Excellent Jumpers was out of the question as the times were too short.

By August 1999, with massage and conditioning, Dyna was a new dog. We decided to give the AXJ a try. On her first attempt, Dyna qualified with a first place. Her second leg was earned on October 30, the same day she earned her AX. Quite a day!

Dyna's final AXJ leg was earned on November 27th with a clean run. No time faults. Cheers went up all around, led by members of the U.S. World Team. It was a special day for a special dog: Ebb Tide's Dyna Mite, CD, Can. CD, AX, AXJ.