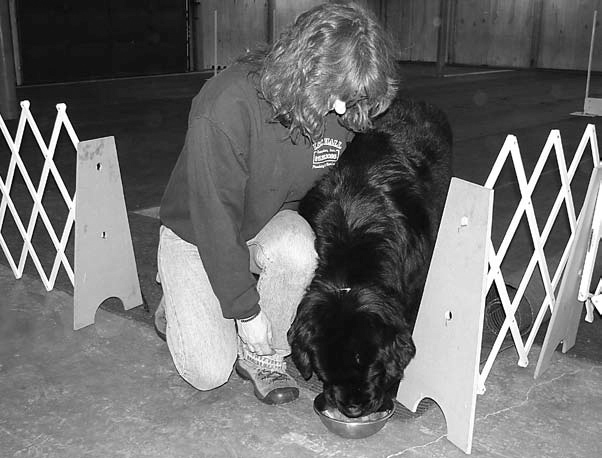 When we brought Flip (Ch. Shadrack’s Rock’n the Boat, UD, DD) into our home and family, he was 11 weeks old, and I knew our goal was to work in obedience and, hopefully, earn his Utility Dog (UD) title; I knew food would be our route to that goal, since Flip, like most Newfoundlands, was highly food motivated. From the beginning, mealtime became an opportunity to train. As a young puppy, he ate three times a day, so we began with three short sessions a day. After several weeks, I started to train an exercise or two in between meals if Flip was particularly perky or restless.

We first worked on the basics: sit, down, wait, back up, take and hold, and short lengths of heeling. After I had his food ready, he was excited to eat, and, using an animated tone of voice, I would say things to get him even more excited. “Are you hungry?” “You wanna get it?” But I would have him sit and wait for it. Depending on how excited he was, I sometimes guided his butt down or used a piece of food to bring his head up, causing him to sit. The bowl was close to him in the beginning, maybe four feet away on the floor. I stayed very close so I could quickly reposition Flip if he got up. The first few times, he only had to sit for three to five seconds. Once I was ready to let him eat, I’d say, “OK! Get it!” Gradually, I lengthened the time he had to wait and the distance of the bowl until he never had to be corrected. Flip learned to work for his meals, loved it, and soon offered the exercises when he saw the food coming.

As he caught on to training quickly, I started to add things to his mealtime routine, such as backing up and circling and spinning before he had to sit and wait for his food. Flip would spin in circles in anticipation of his food bowl, and I taught him to spin circles in both directions. Circles come in handy as you teach heeling, so the dog doesn’t swing his rear out while heeling, because this looks as though the dog is sidewinding, and many judges deduct points for it. I also think they help keep the dog more aware of what his rear is doing and helps keep nice turns and about-turns during heeling. Circles and spins are also handy tension breakers I use between exercises or to get my dog warmed up before training or showing. 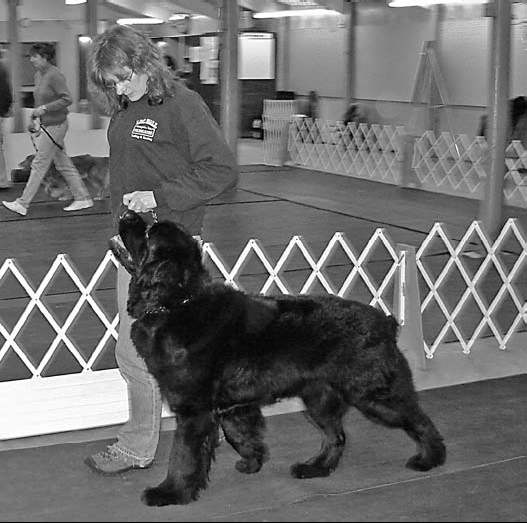 To teach circles, Flip stood in front of me, and I held a piece of food by his nose, a little above his head. Starting with slow motion, I made a circle with the morsel as the dog followed it and ended up turning in a circle. I said “circle” for the left direction and “spin” for the right direction. At first, I moved the treat slowly until the dog made a complete turn pretty much without my hand as a guide. I taught spins in the same way but with the dog moving to the right. I included the spins just for variety because Flip loves doing them, and it keeps his attitude happy.

The back-up is important for many reasons, but especially for Utility work where the dog performs some exercises at a distance of 40 feet from the handler. Many dogs want to creep forward in hopes to get closer to the handler and in a more “comfortable” zone. Teaching the back-up is helpful in avoiding these problems. To teach Flip to back up, I put a tasty treat right in front of his nose and walked into him saying, “Back up.” Soon, he was offering to back up without my walking into him, which is what I wanted. I practiced this everyday until he was able to go backwards 10 or 15 feet or so before I rewarded him; and he got faster and faster at doing it too.

I taught the down using a treat in front of Flip’s face, pushing it into him and under his chin to get him to do a backward motion as he went down. I wanted him to do the sit, down, and stand exercises in this backward motion, instead of coming forward into them. Dogs tend to creep forward on these exercises, and I hoped that encouraging Flip to do them with a backward motion would prevent that, especially when it came to Utility.

I taught the stand exercise kneeling on the floor with Flip at my left side. With a treat in my right hand, I pushed the treat into his nose as he took a step backward while I lifted his rear legs into a stand and said, “Back up, stand.” I dropped the words, “back up” before these exercises when I saw him start to back up into them on his own.

Some larger breed dogs, including Newfs, don’t heel as well as they could, and I tried to do fun things to keep Flip motivated while we worked on heeling, which can be boring to dogs. We worked on heeling while I held food, which helped to teach him heel position and to keep his head up, watching me. I also taught Flip to jump up during heeling for a treat from my hand, saying, “Get it!” To teach this, I held a treat in front of him about a foot or so above his head and said, “Get it.” He had to jump up and forward to get the treat. When he was small, I put my hand in his collar on the back of the neck to help him into lifting for the treat. He started out only lifting a little bit, but as he grew more animated about it, he would sometimes jump up to my shoulder for the treat. I used treats for heeling in this way until Flip was about 10 months old. By then, he was a happy heeling dog and liked to jump up at the start of heeling and at changes of pace. I know that judges may take points off for this, but I never wanted to discourage Flip’s animated style of heeling.

I trained halts, turns and change of pace separately. To get fast halts while heeling, I held a treat just above his nose, and as I was halting, I said, “sit” and moved the treat back a little so he had to tip his head way up to see it. This encouraged him to tuck his rear in fast. When I work on something like this, I spend most of the session on this only, doing it several times before moving on to something else. To keep his fast really fast, I set his food bowl with his meal or treats in it and had someone call for us. When they said “fast,” we RAN, right to the food bowl. Flip caught on to this very quickly; he beat me to the bowl more often than not!

These fun things we did together helped to set a mood for our training sessions as the exercises became more difficult. As our training went on, I focused more on the obedience exercises. Also, as Flip got a little older, our training sessions became more varied and included articles, directed jumping, drop on recall, and the Open jumps. With so many things to learn, he was never bored, because each day, we worked on different things. I could see how much he liked working, and he learned quickly.

It is very important to praise, reward, and get our Newfs excited about doing even the smallest things, especially in the beginning. Although we started training at mealtime, soon Flip became excited to work even when it wasn’t mealtime. When I teach a new exercise, however, I make sure the treat I’m using is fabulous, and he’ll do anything for it. Recalls came easy too, because the sit-stay was solid before hand, and he knew the food reward was coming. If Flip’s recalls started to slow down, I would run away as I left him or, if necessary, correct him with a leash pop—always followed immediately by treats and lavish praise. Praise is critical when getting dogs to work with a happy attitude. Just passing out treats and saying, “Good dog” is not enough. I use the circles, spins and back-up in between exercises, and Flip loves doing these as fast as he can, like a game. The more enthusiastic I am as a trainer, the more animated he is in his performance.

I recommend taking your puppy to a kindergarten or beginner class, especially if you have not trained a dog before. It’s great for socializing and learning how to train the basic exercises. It gives the dog a chance to be around other dogs in a controlled environment. Also, it’s rewarding to see your dog learn in a class situation week after week and progress. When your dog can do the exercises, like sit and down-stay with other dogs close by, you know you’re having success. There also are instructors that can answer questions and help to solve problems your dog might have.

Remember: Being seemingly overboard and enthusiastic with our praise and play will make our dogs happy to work with us. Treats and working for food are great motivators, but our personalities need to come out as fun and exciting. We need to be more exciting to our dogs than the crumbs we drop on the floor in front of them. Happy training.

Proofing - Where the Rubber Meets the Road
by Cheryl Dondino

A Good Retrieve
by Cheryl Dondino