Newfs love people. They don't have to be persuaded to go look for them. And Newfs are extremely efficient. Andy Rebmann, a former Connecticut state trooper who now runs Canine Search Associates in Seattle, says "A Newf is a labor saving device." Recently I watched a top obedience Newf at work in the ring. She expended exactly the amount of energy required to get the job done. Newfs apportion their endurance, so they can work for several hours if they are in good condition. During air scenting, my search and rescue dog, Juno, learned to position herself to maximize scent detection-pausing on a knoll, for example, while checking the breezes that tend to circle around. (The exact opposite of this is the Border Collie that tears around at warp speed, covering as much ground as possible in the hunt for scent. After 40 minutes, he/she is often ready to collapse. Both are good searchers).

Newfs love water. But it is often a critical need and we always carry water with us. I decided with Juno I wouldn't negotiate here. If she is working and needs to cool down, she is allowed to take a break and swim. If she sloshes through puddles and she gets muddy, deal with it. If she drinks from a puddle or other source I cringe, and hope there isn't giardia or some other problem. Juno's half brother, Turk, also a search dog, collapsed and died during a walk at 83 degrees. The streams were dry that year. Newfs get real hot in the summer. The flip side is that they do very well in cold weather, the only problems being ice balls on long body and leg fur. Dogs such as Dobermans and Rotties can't even remain in a parked car in cold weather.

The most important training technique in SAR is learning to watch, read, and trust your dog. If you don't watch, you'll miss subtle and not-so-subtle indicators in their behavior and body language when they detect human scent. For cadaver scent, this is absolutely critical, and the indicators can be incredibly ephemeral fast drop of the nose, a sneeze, a shake. While searching a sector, the handler has a strategy for covering the sector, taking wind direction, elevations and terrain into account. While the handler grids the dog has to be allowed to work unfettered. I can't tell you how many times during training we have been a subject hiding in the woods, hearing the working dog plunging through the brush, only to hear the handler call him off to go someplace else.

Many people believe that the dog gets discouraged if he doesn't find anything. They request that somebody hide for a "quick find" so that he ends his search on a positive. Juno had such an incredibly great time being out in the woods that she didn't need that. I don't know if this is true of all Newfs. Most Newfs don't have the play drive of many other breeds. They work for a food reward instead. A super duper treat for motivating is a jar of baby food. All search dogs need to be motivated by loud, sustained, excited praise when they succeed. A pat on the head won't get you too far in the long run, not when they're giving you everything they've got. You wouldn't believe the screaming and yelling reverberating through the woods at a wilderness training!

The size of a Newf is a negative when it comes to collapsed structure searches, and fishing a dog out of the water who has jumped overboard. When I selected my most recent puppy, I looked for what I hoped would be the smallest Newf, around 90 pounds if possible. (She's now over 100 pounds, about the same as Juno.) 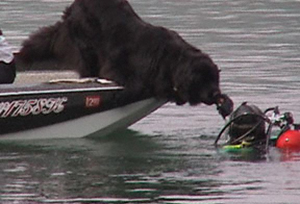 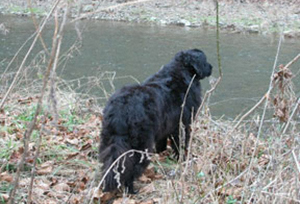